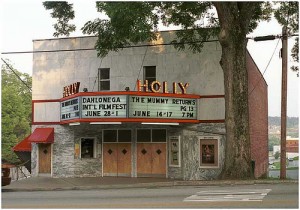 There’s something about a community theatre that just makes a small town.  And Dahlonega’s historic Holly Theatre doesn’t disappoint. Just a stroll down the sidewalk from the vibrant Public Square, this post World War II-era gem has woven its way into the cultural and social fabric of Dahlonega. While the live performances have earned regional acclaim, they are just the beginning of all the Holly Theatre brings to this northeast Georgia town in the foothills of the Appalachian Mountains.

A brisk run as the local movie house in the 1950s saw the Holly serving as an exciting social hub where memories—from first dates to marriage proposals—were created. To everyone’s dismay, the theatre had closed by the mid-sixties. There were several noble but unsuccessful attempts at reopening, but by the 70s, the once-elegant Dahlonega landmark was set on a course of neglect, abandon and ruin.

In 1991, the Holly Theatre Community Center, Inc., was formed as a nonprofit for the purposes of purchasing the building and restoring, preserving and operating it as a community theatre center. A grass roots effort initiated by a handful of Dahlonega residents quickly mushroomed into a remarkable community-wide project. From ripping up mildewed carpet to collecting donations to buy materials, there were plenty of tasks to go around. And plenty of people dedicated to bringing the building back to life.

While restoration work would be ongoing, the Holly Theatre opened with its first live performance in November of 1993. The community pride in what had been accomplished was beyond measure. 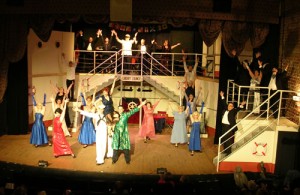 Now, more than two decades later, the Holly Theatre’s performance season includes five adult Holly Theatre Company- produced shows (heavy on the popular musicals) and four children’s productions annually. Pulling off such an ambitious schedule takes the commitment of dozens and dozens of volunteers. Volunteers are engaged in virtually every area of operations, where their roles include actors and directors, set builders, costume makers, sound and lighting technicians, playbill folders, box office operators, concessions stand servers, ushers, board of directors members and many other positions too numerous to list.

And that’s where the Community Center element of the Holly Theatre comes in. Holly volunteers—families and singles, students and retirees, newcomers and natives, with day jobs and without—enjoy a special sense of camaraderie, fellowship and, well…community. They share skills and knowledge, nurture each other’s talents, encourage personal growth and build confidence in each other. Children and teens find cultural enrichment while learning firsthand about teamwork, commitment and discipline in a safe, supportive and fun environment. Young adults have opportunities to develop leadership skills. Older volunteers share technical expertise with the next generation.

So next time you’re in the audience at Dahlonega’s Holly Theatre Community Center, as the curtain closes and the applause rings out, just think:  You can be part of this community, too! Visit  www.hollytheater.com to learn more.

Looking to buy or sell a home in the Dahlonega area? Sue Jones, a native and resident of the North GA area, is a specialized realtor that can help you navigate the local real estate market. Contact her for your local residential or commercial real estate needs.

What Clients are Saying

“Sue has been our Realtor through 3 moves and has always provided us with excellent service. We will use her again and recommend her.” — Alex & Joan Flewellyn

“Sue was perfect! She was extremely professional and she got the job done… fast!” — Richard & Deborah Pendarvis

“Sue was great. The BEST of the BEST!” — Lula Connally